F.J. Journe's extraordinary grande sonnerie and minute repeating watch guarantees both functionality and security - protected by no fewer than ten patents.
F.P. Journe presents the book of the Grande Sonnerie watch. It revisits the centuries-long history of striking watches as well as that of the Sonnerie Souveraine, of which only 4 examples are produced by the manufacture each year.
This magnificient 90-page book, in three parts, is illustrated with many original photographs. It tells the history of the striking watch from the time of medieval bell-ringers to the conception and production of F.P. Journe's Sonnerie Souveraine.

Each Sonnerie Souveraine is baptised, that is, instead of a number it bears the name of its owner. By giving his name to the watch, the owner also gives it a raison d'être, an identity and a unique personality for all time.

This watch is protected by ten patents attesting to the Invenit, and required six years of research and development for the Fecit in the Manufacture's motto.
Invenit and Fecit (Latin formula): I invented it and I made it.

This watch received the Aiguille d'or at the Geneva Grand Prix d'Horlogerie in 2006, in 2007 it was designated Watch of the Year in Japan. 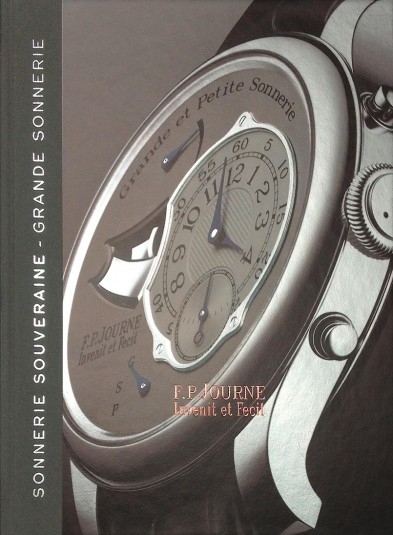