Watchmakers, founded in 1811 in Le Brassus.
This new book brings an additional perspective to the history of this great watchmaking company which operated from 1811 to 1885. In 1922 the grandson of the founder who had worked in the business and was present at the bankruptcy wrote a history of the Company and an account of his personal reminiscences, which was never published.

Any serious pocket watch collectors with an interest in high grade Swiss pocket watches of the early 19th century probably have come across the watchmaking firm of Louis Audemars & Cie, founded in 1811 in the small Jura Village of Le Brassus by Louis-Benjamin Audemars (1782-1833, hereafter L.-B. A) and liquidated in 1885. This enterprise was the first in the Vallée de Joux region to produce complete signed watches (while other early local watchmakers focused on supplying parts or subcontracting to the Geneva based houses). The L.-B. A brand was particularly noted for its watches with extra complications, especially in repeater watches, but also such complications as calendars or time zones. At the peak of their success this firm was one of the pillars on which the stellar reputation of the Vallée de Joux as a high-grade watch making region was built, a reputation that has survived to the present. The origin of this “new” book is in some ways as interesting as its content: Its publisher is a recently retired Englishman named Paul Audemars, who is the great-great-great-grandson of the founder of the Audemars dynasty, with a longstanding interest in family history. It turns out that after the L.-B. A.’s firm was liquidated in 1885, there were a series of local successor businesses, and around 1900 one branch (another Louis Audemars) emigrated to London and operated a watch trading business there for two generations. The patriarch of the UK branch (Louis Audemars-Valette, 1850-1933), the great-grandfather of the current publisher, in 1922 as an old man at the age of 72, decided to write down a handwritten narrative combining family and cooperate history, both based on his personal recollections and as passed down through the generations. The core of the new book consists of an annotated English translation of that hand written French language document (which is included in facsimile format in the new book, taking an additional 96 pages).
A variety of related images (30 illustrations) and documents like a detailed genealogical family tree take an additional 40 pages. And 13 appendices as: Louis-Benjamin Audemars’ letters 1824-1833 and a list of the Company’s important and notable watches etc..
Each book is numbered and signed by the author and translator. Paperback, perfect bound. 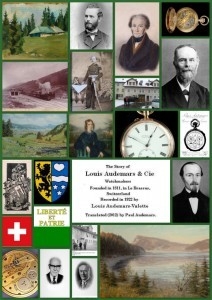