5895 - English Clocks for the Eastern Markets


English Clockmakers Trading in China & the Ottoman Empire 1580-1815.
High-grade English clocks are mostly known for their simple elegance and understated design. But for over 200 years, there was a speciality segment in British horology that radically differed from that norm: Luxury clocks, made mainly in the 17th and 18th centuries, designed and built in England especially for the Turkish and Chinese luxury markets with email dials. The book covers two distinctly different horological niche markets: UK-made clocks exported to the Ottoman empire (now Turkey), and exports to China. Both of them started in the 17th century and reached their peak in the second half of the 18th century. Empire period. The first four chapters provide background information that will be of interest primarily to specialists in the subject matter. Chapters 5 and 6, which describe the life, and the business ventures of the best known and most flamboyant player in that field, James Cox (1723-1800), because one cannot fully comprehend these artifacts without understanding the man and his companies. Cox was a jeweler by trade, but primarily an entrepreneur who designed one of a kind artifacts, and contracted to have the components made by craftsmen in the various horological, mechanical music, automaton and decorative arts trades. For the more casual reader, the core of the book are Chapters 7, 8 and 9, entitled‚ James Cox’s Amazing Clocks and Design and Artistry: The Chinese Market and Ottoman Market Clocks. These three chapters, a total of 130 pages, or about a third of the book, contain over 120 color illustrations (over two thirds of the images of the book), and - at least to this reader - the visual, over-the-top splendor of the artifacts, is what defines and characterizes this section of horological history. That section of the book alone is worth its price. The book under review is a unique and valuable addition to the horological literature, and should appeal to any serious collector of horology who is interested in broadening his or her exposure to a class of fascinating, high-grade horological artifacts that one only rarely encounters even in museums, and almost never in the marketplace. 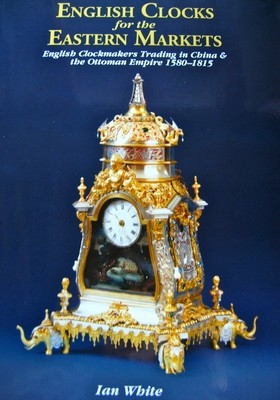